This little book contains stories of individuals living with HIV/AIDS.

I received a complimentary copy from Joshua Formentera, President and Executive Director of PAFPI.

One of the stories written in this book belongs to Joshua. His story was initially published by my former newspaper, People’s Tonight.

The publication of this book was funded by PAFPI and the Ford Foundation. 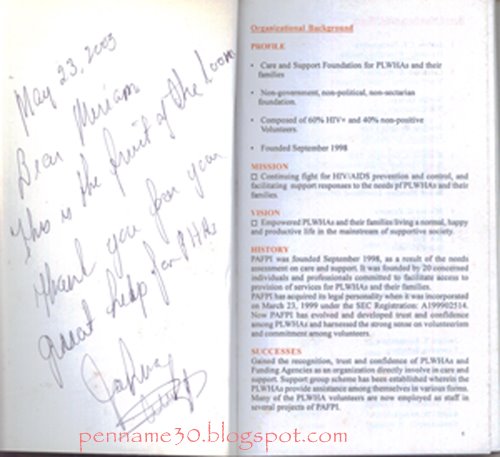 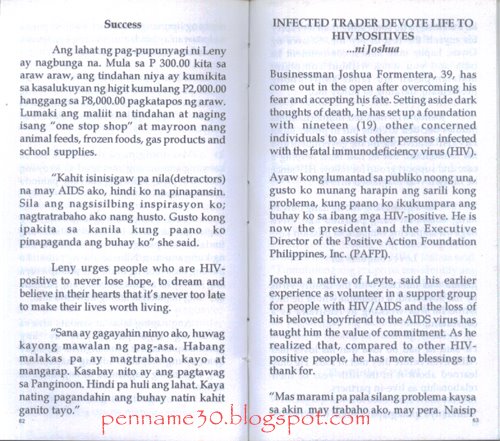 Part of my advocacy as a former health reporter is to spread correct information about HIV/AIDS.

(Last of a series)

HIV warrior Luigi, 19, has reached the last stage of the grief cycle. After blind denial and rage, he has finally accepted his fate. He is now in the process of healing himself and other people living with AIDS.

Luigi is currently devoting his time in completing his Nursing studies this year. His ultimate goal is to serve people with HIV/AIDS, specially in the last stages of their lives.

“I am here to save people at risk of having the same illness that I have now. I would like to serve as an inspiration so others may be spared,” reads a message posted by Luigi on the Net.

Luigi’s perception in life took a 360-degree turn with HIV.

Luigi is currently supporting the Department of Education in its advocacy to include sex education in the curriculum of high school students. The proposal will highlight HIV/AIDS/STI and other major diseases.

“If there will be no serious campaign, what will happen to the youth sector? Panawagan ko po na mag-allot ng three-hour lecture sa loob ng isang linggo for HIV/AIDS/STI and other major diseases such as tuberculosis. It would be a big help to increase the awareness of our young people,” he said, adding that developed countries have already included information on major diseases in their school curriculum.

Luigi stressed that young people should be provided with informed choices because they have the right to health.

The DepEd recently included lectures in school on adolescent reproductive health and reproductive rights. This was slammed by the Catholic Church, which claimed that exposing students to vulgar terms and languages is a form of child abuse.

The Catholic prelates insist that it’s the sole right and responsibility of parents to teach sex education to their children.

While Luigi is against the Catholic Chuch’s stand opposing sex education, he is one with them in saying that teaching children about sex should start at home.

Luigi said he will continue posting messages in the chatroom as long as there is a need to convince people to practice safe sex and stop the spread of HIV.

Luigi is presently residing in the US where he is completing his master’s degree. He is a registered nurse.