I was one of the 20 participants in the 14th Lopez Jaena Journalism Workshop on Media and Gender Sensitivity conducted at the UP CMC in 2005. Each participant is required to submit an article for critiquing. This story appeared in People’s Tonight in Oct. 2005.

JOSIE, a 37-year-old mother of two, was diagnosed five years ago (nine years ago today-2009) with the virus that causes acquired immune deficiency syndrome (AIDS). She is just one of the more than 2,000 Filipinos who have been infected with the human immunodeficiency virus (HIV).

Josie contacted HIV from her husband, a former seafarer.

HIV attacks white blood cells in the body’s immune system that ward off infection. AIDS is the most serious illness that occurs in people who have been infected with HIV.

A person with AIDS (PWA) experiences symptoms from cancer and diseases caused by protozoa, parasites, fungi and bacteria, as well as other illnesses.

Josie was found positive for HIV in 2000, three months after her husband died of an AIDS-related disease. It took two years for her to finally accept her fate. She could not help but think she might end up like her husband.

But she is thankful that her two children, aged 12 and six, are not positive for the AIDS virus.

“Pumi-pick-up na ang number of women na nahahawahan ng asawa nila because they [husbands] couldn’t help but engage in unprotected sex abroad,” says Dr. Maribel Melgar, a psychologist and a board member of the AIDS Society of the Philippines.

Six out of 10 women being served by the Positive Action Foundation Philippines Inc. (PAFPI) worked abroad. PAFPI is a community-based organization catering to the migrant population and persons who have HIV/AIDS and their families.

In search of better-paying jobs, a number of Filipinos are forced to work abroad, with dire effects on the families who are left behind.

Three years ago, PAFPI documented the difficult working conditions of migrant workers. It has compiled anecdotal stories for the United Nations Economic and Social Commission for Asia and the Pacific that illustrate how workers cope with the changes of living abroad.

The documents show, for instance, that most migrant workers develop new relationships. Many of them end up having unprotected sexual contact in the host country.

The danger of acquiring HIV infection and passing it on to their partners back home becomes high.

Most male workers abroad are seafarers who — voluntarily or due to group pressure — frequent commercial sex establishments in many, if not every, port of destination.

Female migrant workers, on the other hand, end up in countries where women enjoy very little social status where they have very little bargaining power.

There, they end up with low-paying jobs and are often exploited, making them vulnerable to violence.

“Mahirap if you are an OFW, iniwan mo ang asawa mo, you have to deal with loneliness, situation from family and alienation from the culture that you are in, they are highly vulnerable to romantic liaisons. Problema nga lang you can’t determine if she or he is positive for HIV sa tingin lang,” Dr. Melgar pointed out.

Seven hundred ninety-seven or 34 percent of the 2,354 people living with HIV/AIDS in the country at the moment have worked overseas.

Seventy-five percent of affected OFWs were males, according to Dr. Rick Poblete, director of the Philippine National AIDS Council (PNAC).

All seafarers undergo pre-departure orientation seminar (PDOS) that emphasizes safe sex. But, according to a recent study made by the Department of Labor’s Occupational Safety and Health Center, they have low level of knowledge on HIV/AIDS.

Rafael, a former seafarer who has been positive for HIV since 2000, says that the 30 to 45 minutes lecture on HIV is not extensive enough to educate and prevent workers going abroad from engaging in sex that may potentially cause the fatal disease.

“I suspected I had the virus as early as 1993,” says Josie who lives in Caloocan. She now thinks that her husband already had AIDS the last time he went abroad.

Josie’s loved ones as well as her husband’s relatives have helped her gradually recover from the successive blows in her life.

When her husband was still alive, he used to joke what would happen if he had AIDS. “Siyempre asawa ako alangan naman sabihin ko hihiwalayan ko siya. Eh kung nagkaroon ka, matatanggap ko.

About 40 percent of women, who were interviewed for the 2002 HIV/AIDS Coutry Profile (Philippines) project of the Health Action Information Network (HAIN), admitted that they do not have the confidence to ask their husbands to use condom even if they have adequate knowledge of STI/HIV/AIDS.

The study, supported by PNAC and the United Nations Joint Program on HIV in the Philippines (UNAIDS-Philippines), also showed that 43 percent of women admitted having been forced into sex at times and 15 percent believed it was their obligation to have sex with their partners.

Josie would like to share her experience with other mothers and wives, warning that there are many of them who are in the same situation with the same disease today.

While she has accepted her fate Josie cannot help but feel the pain, anguish and regret.

(The article was edited by my former editor Paul Icamina. Gracias! ) 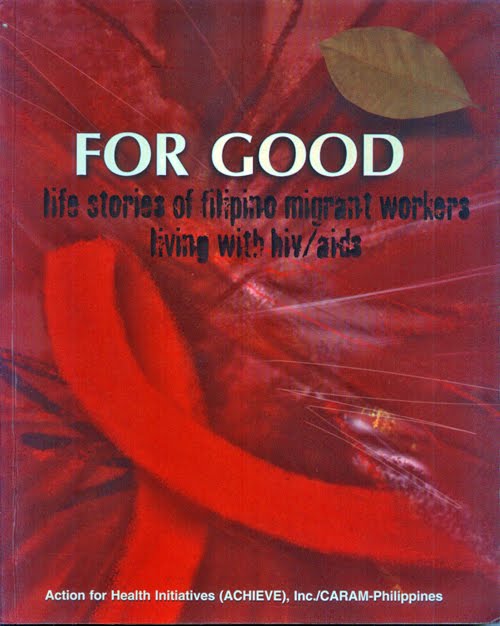